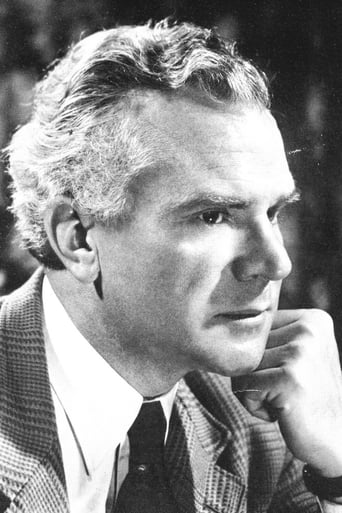 Esmond Penington Knight (4 May 1906 – 23 February 1987) was an English actor. He was an accomplished actor with a career spanning over half a century. For much of his career Esmond Knight was virtually blind. He had been badly injured in 1941 whilst on active service on board HMS Prince of Wales when she fought the Bismarck at the Battle of the Denmark Strait, and remained totally blind for two years, though he later regained some sight in his right eye. During this period, Esmond dictated an early autobiography to his secretary, Annabella Cloudsley, Seeking The Bubble (Hutchinson & Co. 1943). He played the captain of the HMS Prince of Wales in the 1960 movie Sink the Bismarck! He starred as Professor Ernest Reinhart in the 1961 British science fiction television series, A for Andromeda, alongside Patricia Kneale and Peter Halliday. His daughter is the actress Rosalind Knight. Knight died of a heart attack. He was cremated. Description above from the Wikipedia article Esmond Knight, licensed under CC-BY-SA, full list of contributors on Wikipedia.